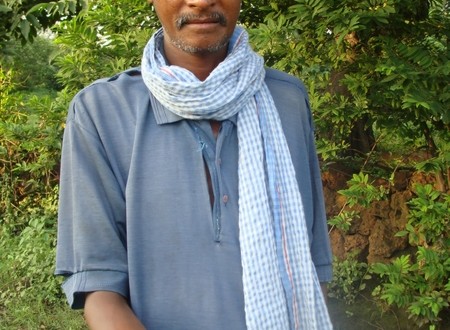 Advocacy for respect of Adivasis’ rights in India

Currently enrolled in a Master of anthropology of law in Paris, I am carrying on a research on land rights and land issue in tribal communities of Orissa (India).

After studying environmental law, I attended a theoretical and practical summer course in South India at the IITPD. This training, coordinated by SOLIDARITÉ, provided me with reflexions and skills on post-development and was followed by an internship with the Indian NGO “NAVDANYA”. During this internship, I got involved in a fieldwork in Orissa which enabled me to get a concrete and critical approach of violation of tribal rights as well as a realistic picture of environmental and social impacts of industrialization of tribal lands.

I am now working with SOLIDARITÉ and dealing with its advocacy campaign for the recognition and respect of Adivasis’ rights and against land grab.

Why a campaign in favour of the rights of indigeneous people of India?

Living in remote rural and forest areas, Adivasis communities have been the first victims of the Indian economic policy characterized by unprecedented  greed for tribal land and  its rich mineral and natural resources. Despite a protective legislation and the recognition of indigeneous rights on forest and land, Adivasis’ lands have been violently grabbed by local governments and exploited by private corporations in the name of the mortiferous myth of economic growth. This policy is responsible for massive forced displacements of people, dramatic industrial pollutions as well as destruction of the cultural identity of Adivasis which is rooted in the relationship between humans and Mother Nature.

Regarding this alarming situation, we can not ignore the very first cause of violation of tribal rights and land spoliation: the unbridled and frantic pace of development and its undemocratic and disastrous policy to which French and European companies actively take part.  Therefore, we have to support our Indian fellows – organizations, civil society movements and activists – in their unstopping and non-violent struggle in favour of Adivasis communities and for justice and peace.

SOLIDARITÉ takes action by supporting the campaign of its Indian partner NAVDANYA and by providing information and working for awareness of the French and European civil society. Bringing consciousness on Adivasi’ issue and land grabbing in India will be a vital step toward responsabilisation of our political leaders and economic actors implemented in tribal areas.

“In the words of Martin Luther King, Jr. “Injustice anywhere is a threat to justice everywhere.” Every individual needs to stand up to defend our common natural heritage as well as the constitutional rights of our indigenous people.” NAVDANYA – April 2010.

NAVDANYA is an Indian NGO, created in 1984 by the physician, Nobel , activist and feminist Vandana Shiva. This organization aims at promoting a sustainable and organic agriculture in respect of the rights of human as well as Mother Earth. NAVDANYA’s policy and actions have been committed to sovereignty and autonomy of small and poor farmers of India.

NAVDANYA has been strongly fighting against GMO and promoting local and free seeds for the goodness of biodiversity and independence of peasants. It constitutes today a national network of farmers and seed keepers working together for ecology and democracy. NAVDANYA has recently got involved in the defence of Adivasis’ rights in reaction of landgrab by industry and private corporations. Fighting for the recognition and protection of indigeneous knowledge regarding ecology and agriculture, NAVDANYA firmly opposes forced displacements of Adivasis, brings awareness among the Indian civil society and denounces violations of indigeneous rights on land and forest by local governments and companies.

NAVDANYA recently took part to the huge movement of protest against the exploitation of Niyamgiri –the sacred mountain of the Dongria Kondh tribe in Orissa- by the Vedanta Company. Its team is currently working on POSCO case in Orissa and preparing a disinvestment campaign as well as the publication of an Atlas on Land grab in India.